The first country to face being wiped off the map by climate change is Kiribati in the South Pacific. Its 100,000 residents live on flat atolls only a few feet above sea level, and they are already beginning to be inundated.

The government is making plans for everyone to emigrate to Fiji. I guess it won’t be necessary for the last one to leave to turn off the lights, since all the electricity will short out as the islands disappear under the waves. 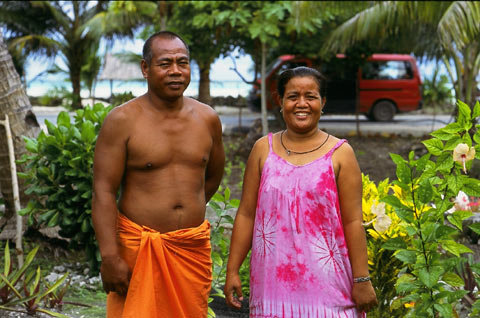 Fiji is a good choice, since its two main islands, Viti Levu and Vanua Levu, are mostly at least 150 meters above sea level.

It is only America’s oil billionaires, who have multiple mansions atop hills, who can afford to deny the effects of climate change. They are the ones responsible for the Kiribati migration, and if there were any justice, the residents would be allowed to sue the major petroleum, coal and gas corporations for compensation.

The most conservative estimates are that by the end of this century, sea level will rise about 3 feet or a meter, as a result of surface ice melting under the impact of rising temperatures. The temperature increase is a direct result of humans spewing massive amounts of carbon dioxide into the atmosphere by burning gasoline, coal and natural gas, and by putting other green house gases such as methane into the atmosphere.

The oceans warm up very, very slowly, because of all the deep, cold water that only rarely circulates in great amounts to the surface. So although automobile-driving and coal-heating humans could provoke an average surface temperature rise of 2 to 5 degrees Centrigrade (more than 7 degrees Fahrenheit), and although historically each increase of 1 degree C has resulted in a sea level rise of 10 to 20 meters/ yards, the full catastrophe won’t strike for centuries.

If humans run through all the currently known hydrocarbons, that would provoke the 5 degree C increase, and would over time cause all surface ice to melt, all regions of the earth to become tropical (including Antarctica), and so much increase in sea level that about a third of the world’s land would be inundated. This scenario last played out beginning about 55 million years ago, in the Eocene. It is not clear that the human species, which evolved under much colder conditions, could survive under these circumstances. Certainly climate catastrophes would kill millions.

How unseriously Americans are taking this looming crisis is obvious in that they still keep enormous numbers of neon lights over commercial establishments burning at night. Surely at least that should be illegal, or legal only if they are powered by renewable energy.