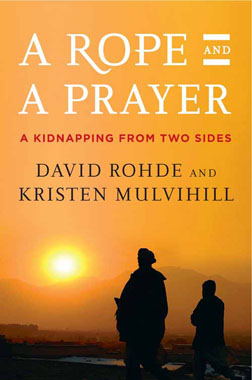 The War News Radio Speaker Series will host David Rohde and Kristen MulvIhill Saturday, March 19th. Join us in Science Center 199 on the Swarthmore College campus in Swarthmore, PA. The event is free and open to the public.

A Rope and a Prayer

In November 2008, David Rohde, a Pulitzer-Prize winning correspondent for The New York Times, travels to meet a Taliban commander outside Kabul, Afghanistan. The interview is risky, but Rohde hopes it will be the final piece in a book he is writing about the Afghan war. A few days later, he will return to home to New York to be reunited with the woman he married just two months earlier, Kristen Mulvihill, and begin their new life together.

But the interview is a trap. Rohde, his driver, and the Afghan journalist working with him are kidnapped by Taliban militants and taken deep into the tribal areas of neighboring Pakistan. For the next seven months, they are spirited from one Taliban stronghold to the next as their abductors keep a wary eye out for American drone attacks. In the process, Rohde becomes the first American to see close up the thriving terrorist ministate the Taliban have established inside Pakistan. As the militants train suicide bombers and plot attacks, Rohde and his colleagues witness how Pakistan’s powerful military turns a blind eye to the Taliban’s activities. All the while, Rohde’s kidnappers treat him with a mixture of cruelty, hospitality and greed, promising to release him one minute and threatening to sell his bones to his family the next.

In New York, David’s wife, Kristen, together with his family and the staff of The New York Times, struggle to navigate a labyrinth of conflicting agendas, misinformation and lies. They appeal to government and intelligence officials in Washington and Islamabad, send messages to David’s captors and hire contractors to negotiate with them. For David’s safety, they manage to keep the kidnapping secret for months. Kristen’s life becomes agonizing and surreal, as she shuttles between the celebrity photo shoots she oversees in her job at Cosmopolitan magazine and private meetings with the FBI. She comes to realize that no one knows where David is, or how to secure his release.

Part memoir, part work of journalism, this is a story of duplicity, faith, resilience and survival that transcends the personal to illuminate the larger, international tragedy of America’s involvement in Afghanistan and Pakistan. Their account of those seven months is both a love story and a reflection of the great cultural divide — and challenge — of our time.

David Rohde, winner of two Pulitzer Prizes in journalism, is a reporter for The New York Times and the author of Endgame: The Betrayal and Fall of Srebrenica. He won his first Pulitzer Prize in 1996 for a series of stories in The Christian Science Monitor that helped uncover the Srebrenica massacre in Bosnia and his second in 2009 as part of The New York Times’ team covering Afghanistan and Pakistan.

Kristen Mulvihill has been a fashion and photography editor at various women’s magazines, including Marie Claire and Self. Most recently, she was the photography director of Cosmopolitanmagazine. She is also a painter and illustrator.

David and Kristen grew up in New England and graduated from Brown University. They live in New York.