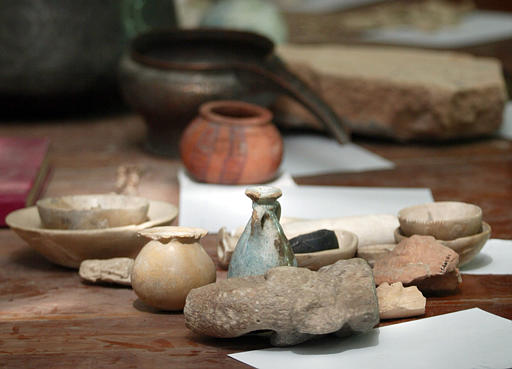 This week on War News Radio, we take a look at the illegal market for antiquities from Iraq. Listen now to this report from Hansi Lo Wang and Shelley Salant.

We also revisit the story of an Iraqi artist who managed to capture beauty at the onset of an ugly war. Listen now to Amelia Templeton’s report.

Finally, we look beyond the physical impact of improvised explosive devises, or IEDs, to their devastating psychological effects. Listen now to Zachary Fryer-Biggs’s report.

These stories, plus the week’s news, from War News Radio.

Listen to the whole show:

Host 1: In the span of four days, two high-profile kidnappings have taken place, resulting in much more than two missing persons. On Saturday, Sunni legislator Tayseer Najah al-Mashhadani and eight of her body guards were kidnapped by suspected Shiite militiamen en route to Baghdad. The kidnappers, who are believed to be associated with government officials, have issued demands for Mashhadaniâ€™s release, including a timetable for the withdrawal of US troops and security for Shia places of worship.

Host 2: Then, on Wednesday, Deputy Electricity Minister Raad al-Harithâ€™s convoy was ambushed in eastern Baghdad. Gunmen abducted the minister and some nineteen bodyguards. Twelve hours later, al-Hadith and seven of his bodyguards were mysteriously released. The deputy minister declined to comment on the details of the kidnapping and release.

Host 1: In the wake of legislator al-Mashhadaniâ€™s abduction, the main Sunni political bloc pulled its 44 members from Parliament in protest and threatened to remove Sunni members of the Prime ministerâ€™s cabinet if measures were not taken to facilitate her release. Shiite and Kurdish factions of the Parliament expressed sympathy for the Sunniâ€™s demands for raised security and the swift return of their member, but encouraged a unified front between groups in this time of distress. Despite the walkout, Parliament continued to convene throughout the week.

Host 2: American forces have come up with a plan to secure downtown Ramadi: bulldoze it. Since beginning a major operation there last month to rid the city of insurgents, US forces in Ramadi have encountered fierce resistance. Buildings in the downtown area are in ruins due to constant fighting, but still provide cover for insurgents attacking American bases and patrols. In a strategic move, US forces will literally clear out insurgents from downtown by demolishing all the buildings. They will then construct a fortified stronghold much like the Green Zone in Baghdad.

Those three countries are Sunni and the Iraqi insurgency is Sunni, so they may be able to facilitated some kind of reconciliation process. They donâ€™t have control over the insurgency but they have influence over some of the more moderate leaders

Host 2: Another part of al-Maliki’s tour through the Middle East includes calling on Arab countries to forgive Iraq’s sizeable debt. Many Western nations, including the United States, have already forgiven the debt (or cleared Iraq’s books), and American lawmakers have complained that Iraq’s Arab neighbors have not shouldered any of the reconstruction bill. Iraqi leaders hope that the debt cancellation â€“ some $40 billion â€“ will help the country through this difficult rebuilding period. James Phillips says that in the past, debt burdens have led to more than just bigger bills.

One of the problems after WWI was that the French and other countries refused to lift debt burden which allowed the Nazis to exploit a huge issue within Germany. So it could help if the other Arab countries reduce their debt, I doubt theyâ€™ll eliminate it all together, but it could help if they lower it so the Iraqi govâ€™t could use oil revenues to help their people.

Host 1: Arming Insurgents: Malikiâ€™s reconciliation plan hopes to draw insurgent groups into the peace process by offering amnesty to insurgents who denounce violence. While up to 15 groups have expressed interest in negotiations for disarmament, other groups want to help bring safety to Iraq in a different way.

Host 2: Leaders claiming to represent 1 insurgent groups contacted the Iraqi government, not to give up their weapons, but to ask for more. Reports say these groups want weapons and ammunition to turn on heavily armed foreign al-Qaeda fighters. Though these insurgent groups once worked with the foreigners against the government, they now want to drive them from Iraq and help the Iraqi administration. The proposal has met with mixed responses from Iraqi leaders.